War! Destruction! Chaos! An overview of our workshop held on 24th February

This week’s workshop (Monday 24th February) was all about building on the great musical inroads we made last week, and continuing to explore how we might represent the contrast between the happiness felt at Congo’s independence and the fear, shock and confusion felt at the outbreak of the Congolese Civil War.

From the outset, our lyricist and director, Cheryl, and theatre-maker, Tyndale, encouraged the group to engage with the idea of community in chaos: even in the warm-up, Cheryl had everyone running about the space, hastily forming groups of a certain number (“GROUPS OF THREE!), or connected physically by one body part or another (“GROUPS OF FIVE, ALL TOUCHING NOSES!” – a personal favourite), and then breaking off to be frantically walking alone again. As the speed quickened, the group ran around, haphazardly – and sometimes a bit uncomfortably! – thrown together with and then flung apart from those randomly closest to them. The scene was set for this week’s exploration of the chaotic results of war on the community. 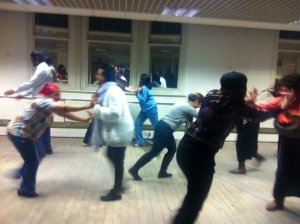 After the warm-up, we recapped where we are at in terms of creating the live show celebrating Congolese heritage for June 28th (the show will open in 1960s Congo, newly independent, using the songs and Rhumba dance moves we learnt in the first workshop). The event is being created using the many different talents of each of the participants – everyone gets a chance to showcase what they can do, whether it’s singing, cooking, dancing, writing, anything! – and this week, Tyndale, our musical director, asked those who mainly wanted to sing to form a group. Melanie, Vero, Marie and DuDu stood to one side, and we began to rework the songs and rhythms that we started on last week by organising into separate parts with each singing – or shouting! – their own section. Shouts of “War!” and “Destruction!” mingled with the haunting ‘We We’ melodies sung by the foursome, and sounds of weapons, bombs and a heavy drum beat that Tyndale and Pat (our percussionist) had created blended darkly with the sound of the Djembe drum. The war song began to take form!

After a well-deserved break, the group reunited to sing some songs with Emmanuella. Singing in a big ring, some of the performers took drums, boxes – whatever they could get their hands on! – and danced about the space. As the energy of the group built, we finished the session with a more concrete idea of the form of the songs we’d learnt, a lot of smiles and a big Conga line. Stay tuned for next week’s session on Monday  3rd of March.